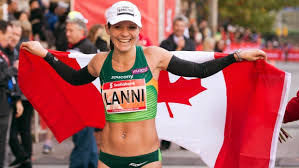 Performances at today's Scotiabank Toronto Waterfront Marathon left organisers delighted as the Canadian women's marathon record was finally beaten after twenty eight years. And, not by just one athlete.

Lanni Marchant and Krista DuChene, who both represented Canada at the 2013 IAAF World Championships in Moscow, climbed into the upper ranks of marathoning with their personal best performances under near ideal weather conditions.

Marchant recorded a time of 2:28:00 to take 36 seconds off Syliva Ruegger's record claiming 3rd place overall while DuChene finished 33 seconds behind in 4th.

The former earned $8,000 prize money plus a $28,000 Canadian record bonus which was generously offered by title sponsor Scotiabank. The pair were greeted with hugs at the finish of this IAAF Silver Label Race by Ruegger herself.

Marchant, a native of London, Ontario, finished behind Kenyan winner Flomena Cheyech (2:25:13) and Ethiopia's Sechale Adugna (2:26:43) but the result scarcely mattered. Sharing the spotlight with Ruegger was a dream come true.

«It's kind of special for me, she declared. When I first started marathoning my coach Dave Mills in London said hey the record needs to go down some day.' I don't think either of us thought I would be the one to do it. I am in shock now. I didn't expect it.»

«And having Sylvia here; she is such a legend to me and she is such a strong personality, I am in awe. I have never put myself on her level so I am kind of weirded out on the whole thing.»

Asked when she knew she had the record safely in her hands she laughed.

«Really not ever until even the last kilometre, she laughed. I asked the guy on the bike how far back is Krista? and what pace 'am I on?'  My calfs didn't cramp as bad as the world championships but they definitely started to hurt.»

«Throughout the whole race our pacers were great and I just tucked in behind Krista and the pacer. I guess about 33k or 34k I kind of pulled away from Krista and I was thinking I have to keep going. The worlds was in the back of mind and with a flip of a switch things can go wrong. So I though just take control, stay patient. Then some of the Ethiopian and Kenyan women started coming back to me. I am still in shock.»

«I couldn't make a 2:06 today but next time I can, he said. I am happy to finish in the time I did. I can run 2:06 but in the end I felt tired. I made a mistake in the end and (temporarily) went with the pace car when it turned off the course (with 400m remaining).»

«The roads were smooth, I didn't mind the course I had no problems. I feel happy today.»

Canadian men were also prominent. Eric Gillis, a two time Canadian Olympian from Antigonish, Nova Scotia, was on Canadian record pace for 30 kilometres but faded in the final stages to finish 5th in 2:11:49. It was the second fastest time of his career. Behind him in 6th was Rob Watson of London, Ontario in a new personal best of 2:13:29. Defending Toronto champion, Sahle Warga of Ethiopia, was 7th in 2:16:03.

«It was tough my body felt ok but once I started slowing down, Gillis revealed, I couldn't pick it back up I tried not to look at splits the last 10km because I didn't think I was going to be too happy with them.  I thought I could run under 2:11.»

«Somewhere in the last 5km I really slowed down. I had the best first half of a race I have ever had. I had amazing pacers that took me to 30k on Canadian Record pace and I think today just showed me that I am going to have to get stronger for that last 12km. That's where you make or break the marathon in terms of good times.»